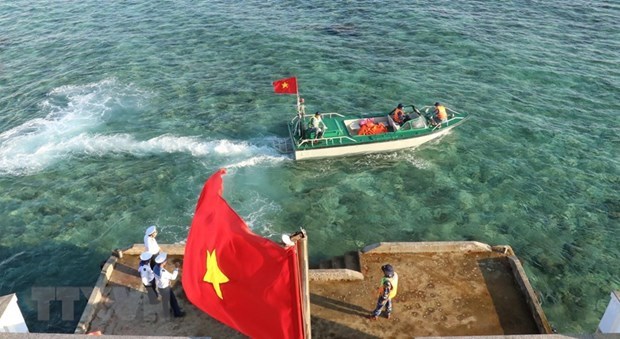 Vietnamese agencies always keep a close watch on all activities in the Hoang Sa (Paracel) and Truong Sa (Spratly) archipelagos as well as Vietnam’s territorial waters in the East Sea. (Illustrative photo: VNA)

Responding to questions related to the situation on the East Sea,
the spokesperson said Vietnamese agencies always keep a close watch over all
activities in the Hoang Sa (Paracel) and Truong Sa archipelagos as well as on
Vietnamese waters in the East Sea.

Regarding reports that several Chinese vessels appeared near Tri
Ton island in Vietnam’s Truong Sa archipelago, Hang reiterated that Vietnam has
sufficient historical evidence and legal grounds to testify to its sovereignty
over Hoang Sa and Truong Sa in accordance with international law.

As a member of the 1982 UN Convention on the Law of the Sea
(UNCLOS 1982), Vietnam has sovereignty, sovereign rights and jurisdiction over
related waters in the East Sea as defined in line with the Convention, she
said.

Commenting
on a report that the chief of staff of the Philippine armed forces made a trip
to Thi Tu island in Vietnam’s Truong Sa and affirmed the Philippines’ plan to
convert the island into its logistics hub, the spokesperson stressed that
Vietnam resolutely objects to all violations of its sovereignty and related
rights over the Truong Sa archipelago.

“Vietnam requests that all concerned parties respect Vietnam’s
sovereignty and international law as well as the Declaration on the Conduct of
Parties in the East Sea (DOC) and take no actions to complicate the situation
while making practical and positive contributions to the maintenance of peace
on the East Sea as well as creating favorable conditions for the negotiation on
a Code of Conduct on the sea (COC),” spokesperson Hang said./.

The Hidden World of the LCL Consolidation Market – Part 1

Global Trade Sputters, Leaving Too Much Here, Too Little There

Worldwide Freight Forwarding Industry to 2026 – Asia-Pacific is Anticipated to Witness High Growth
× Contact us at there !